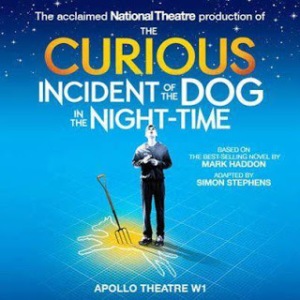 In 2012 the award winning bestselling novel ‘The Curious Incident of the Dog in the Night-Time’ transformed itself on stage, sweeping up an impressive 7 Olivier Awards in its first year, leading many to compare its success to that of ‘War Horse’. As an individual on the autism spectrum who very much enjoys theatre I decided to step away from my computer, fight my London daemons and go experience the story in the flesh. 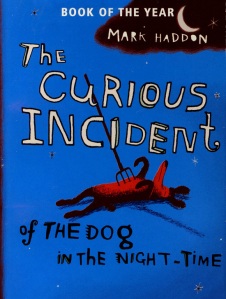 Given that the author of the acclaimed novel created his main character by giving him ‘kind of nine or ten rules that he would live his life by’ and then did no further research on Autism or Asperger’s, the character sprung onto the stage does a remarkable job of conveying to the audience how it feels to be autistic. You can read all the text books and personal accounts of Autism written, but there is nothing quite like being given a chance to experience it with all your senses, because ultimately it is the senses which the disorder most affects. The play begins in darkness with a clashing whirl of light and sounds leading to the first scene: an uncannily realistic looking dead dog with a folk staked through its middle.

Christopher John Francis Boon is 15 years old. He is exceptionally good at mathematics and dreams of becoming an Astronaut. He does not trust strangers, he has never ventured beyond the end of his road and he definitely did not kill the dog, even though he is found looming over its lifeless body at the time of the incident. However, we know he is telling the truth because he also never lies. After being charged at the scene of the crime for attacking a police officer Christopher sets out to uncover who exactly did kill Wellington, because whoever did kill Wellington has committed a crime and so should be punished. Despite his father’s protests he must overcome his stranger fear and embark upon his mission just like a young Sherlock Holmes would: knocking on each of his neighbour’s doors and asking them quite matter of factly “Do you know who killed Wellington?” As truths are revealed not only about the ‘incident’ but also about the mother he believed had died, the mystery takes him beyond the boundaries of his home in Swindon and to another world entirely, more alien to him than outer space: London.

“What is it that boy’s got?” I overheard the woman next to me ask her unenthusiastic theatre buddy.
“It’s umm… oh it’s that autism but at the high end, it’s that… ummmm… Asperger’s”
“Oh yes we decided a woman in our book club had that, very inappropriate responses”. After hearing this painful exchange of conversation during the interval which led to my tongue bleeding, it suddenly dawned on me, autism is not mentioned in the play at all. I had expected a very autism biased audience, but in fact it comprised your regular eclectic West End theatre mix and people were going to watch ‘The Curious Incident of the Dog in the Night-Time’ like they were going to watch ‘Wicked’ and ‘Les Mis’. The author, Joe Haddon, has been adamant since the book was published that it is not a book about Asperger’s but about being different and that Christopher not be labeled, as this is not the most important thing about him. It is this understated reference to the disorder which makes it most accessible to such a wide audience; it allows people to see themselves in the character rather than getting caught up in the ‘Them’ and ‘Us’ mentality such labels evoke.  There is no denying, however, that Autism is a significant part of the story, and to ignore it would like watching the performance blindfolded. 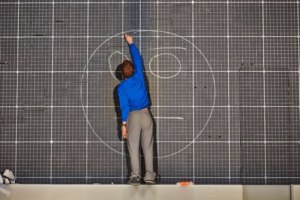 Where the book fell short in places the stage production dexterously and potently provokes the enervating sensory overload Christopher experiences, the audience can not only see it but feel it too. Christopher is obsessed with trains and their timetables but never having actually been inside a train station, his first experience is somewhat awakening. Crashing unexpected noises louder and louder, luminous numbers flashing bigger and bigger, people moving and switching, an endless stream. The intensity grows as Christopher begins to crumble, repeating his destination over and over to stay focused and sooth himself, he is carried around the stage as though he has been swallowed by his senses before the world goes black collapsing on the floor. His first tube experience in London is no better, the rails looming like an endless pit with electricity flashing beneath them as the wall on the stage closes in pushing him closer and closer to the line. People come and go from the trains whilst he stands by dazed by the repetition until finally being dragged into a carriage. Christopher’s explicit experience of a ‘meltdown’ following these events was performed with impeccable accuracy and attention to detail, from the twitching of his hands to the convulsion of his entire body.  So good was the sensory overload experience that I found myself stimming with my own hands on the verge of a meltdown. Note to self, stick to Autism friendly viewings in the future and avoid all London public transport beforehand. 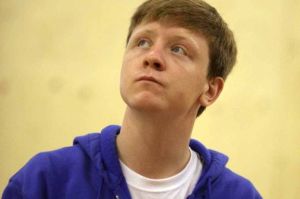 As Christopher himself explains on board the train, most people only notice one thing at a time, such as “there are sheep in that field” or “It is raining outside”, whereas people like him see it all: “there are 15 sheep in that field, 5 lambs, one black, there are two types of flower nearby, bluebells and poppies, the train has passed three crossings, the first had a red Fiat Panda car waiting and a blue Ford Fiesta… etc etc’. It is no wonder the world is a frighteningly overwhelming place to navigate with a brilliantly detailed mind such as his, and his difficulty empathising with others and his naïve literalness and honesty only makes this foreign land even more of a challenge; he would be well adept with his dream career as an astronaut in space. Lead actor Mike Noble inhabits the role with such sensitivity and precision it is hard to imagine he does not have the disorder himself, so believable was his every move, simplicity and directness. A performance very much aided by a masterminded stage set up perfectly to bring the character to life; a mathematical grid which lights up in different coloured lines across the floor, bare apart from a handful of props scarcely placed in positions around the edges, ordered and clearly 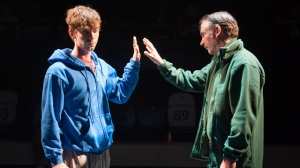 Interwoven with the fast pace and drama were moments of heart-warming uninhibited humour which melted the audience with audible ‘Awhs’. Unable to connect with others or allow them to touch him, his parents hold out their hand allowing Christopher’s to mirror and join theirs; this provided some of the most emotive scenes on stage watching the silent connection. To top it off and kill the audience with compassion a live puppy is brought on stage at the end, Christopher’s unbounded loyalty and love shines through and unlike his rather inhibited connection with fellow humans, his connection with animals is one of pure empathy.

The play’s ending is more heartbreaking than heart-warming, as a confident and hopeful Christopher believes he can now tackle anything after going to London and completing his Maths A Level, whilst his teacher and mentor is somewhat less optimistic, and the futility of his situation is plain for all to see; a bit of a downer! The play was by no means without its flaws. The theatrical set up of a play within a play was somewhat annoying, not helped by a rather irritating narrative throughout. To be picky the story itself illustrates only a very stereotypical view of autistic spectrum disorder behaviour, and when put on the stage was not particularly ‘autism friendly’. Despite this it does a fantastic job of bringing to life a way of viewing the world not previously available to those not on the spectrum, and leaves even the most typical  ‘neurotypical’ seeing parts of themselves in Christopher, bridging the gap between what is ‘disorder’ and what is ‘normal’. A must see for anyone connected to anyone on the spectrum, and pretty much everyone.

← ARCHIVED – Eating Disorders and Autism
ARCHIVED – The Art of Networking →